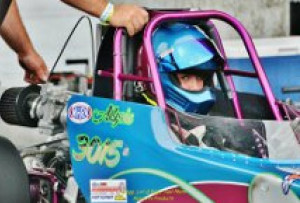 Allysia Vaultonburg is 12 years old and racing is her passion. She starting racing junior dragsters when she was 8 years old in Havana, IL at Central Illinois Dragway. The past two seasons we have started traveling quite a bit throughout the season which has made Allysia into the driver she is today.

She follows the Midwest Junior Super Series which consisted of 6 races this year, but they were only able to attend 5. Allysia ended up 2nd in the 8.90 index class out of 42 total participants in that class. Allysia has represented CID at the Division 3 Finals in the Race of Champions for 10-12 year old’s for the past two years. Last season with a quarter final finish, this year she was runner up in that race. Allysia’s dream of course is to race professionally. She has a good head on her shoulder’s and plans to attend college and focus on motorsports engineering. She is a straight A student with a 4.0 gpa in the 6th grade. Typically if Allysia is not studying for school she is usually watching drag racing videos on You Tube or practicing on the practice tree.

During the off season Allysia participates in the NASP (national archery in schools program). Last year was the first year it was offered and Allysia had never picked up a bow until October of that school year. Practice started in January and by April Allysia had placed 4th in the state of Illinois for 5th grade girls earning her a trip to the National meet. The Canton High School team qualified for the World meet and invited Allysia to join their team at the NASP World Finals where she placed in the top 12 of the high school team and as an individual ranked 40th in the world for 5th grade girls.

We at Crew Chief Software congratulate her progress and look forward watching her in the future.